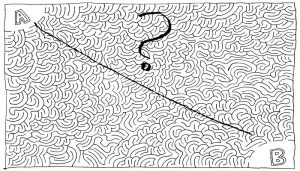 “…I think that the minute that you have a backup plan, you’ve admitted that you’re not going to succeed…”

The above quote was making its rounds on LinkedIn for a while. People “liked” it. Many thought it was great and motivational. In its original context and form it probably was, as it was made in relation to dropping out of university and focusing on a business venture. Since she was fully committed to the business venture, leaving the door open to go back to university was not what she wanted. In this sense the statement effectively meant complete focus on the goal. And while at it, doing the right thing right, at the first time. I respect that. A forward plan – while it can be risky – is always commendable.

Although I have some concerns about the quote itself which I am going to discuss later, the argument I have foremost is not with the person who made the statement. It is with the seemingly simpleton people who took it out of context, changed it and elevated it to an undeserving and unnecessary pedestal, idealising it.

Most quotes I’ve seen, omitted the first three words “I think that…”. Omitting these words from the statement changed the tone, the focus, the language and inevitably the message itself. There is nothing wrong thinking in a particular way, even if it is wrong. After all it is just a thought or an opinion. We all have the right to be wrong. Yet the omission made it an absolute statement – what impressionable young people like, I am told – and created an assumed level of authority without a proper base for authority.

Perhaps I can get a bit closer to the point with an example. In this shorter form the statement sounds like many statements that were made during the dotcom bubble. For those readers born after 1980, the dotcom bubble was a speculative bubble based on overvaluation of Internet companies. Companies were created on individuals’ personality and unverified visions instead of solid strategic plans. Stock values grew rapidly without actual equity behind them. Fortunes – and bold statements – were made then lost very quickly within the roughly 5 years of the dot com era. Sounds familiar, even ironic, isn’t it?

Again, I am not prepared to argue here with the original statement itself. As I remarked, the problem is the modification and the credulous elevation of the statement. Herd mentality is also a concern as I have seen many who tried to appeal to common sense were talked down. I believe the naïve; social networking mindset many people have should be reviewed and corrected in these aspects for the benefit of all.

Bernard Boar in his 2001 book – right after the dot com bubble burst – contrasts paradoxical thinking with linear logic as a necessity for controlling the hyper-conflicts of the market place. In its simplest form paradoxical thinking means that while the shortest way from A to B is a straight line, roadblocks are anticipated and preparations are made to circumnavigate them. That indicates that the difficulties are not necessarily inside, but are rather on the outside.

As a firm meets intelligent counter-measures by competitors, it considers what could be done to foil their ambitions. The original goal is not forgotten, but the road to it might be altered. (Ex-Eastern-Bloc citizens understand possibly this best, as they practiced and elevated the identification and circumvention of Politbüro rules to an art form.)

Since backup plans focus on anticipated hindrances, they are never the same as the original plan. They are contingencies to achieve the original goal in spite of difficulties. Alternatives and options in anticipation of obstacles and how to overcome them. The anticipation and preparation of counter-measures is not planning for failure. It is planning for success.

All of these may seem obvious enough. The point I am anxious to make is – and I want to make it clearly –that a backup plan is not for giving up the non-negotiable goal. It is ensuring the goal is achievable. The famous analogy about information security can be applied here, too. No one puts brakes on the car to go slower. Brakes are there for the car go faster, but safer. Along the same lines, backup plans are not meant to slow down a company. Rather they facilitate and enhance growth… safer growth.